For over 10 Years DJ Selector E (aka Eric Brayman) has been supporting Charlottes HIP-HOP scene with a monthly event that showcases the cities most talented MC’s. The collective is known as QC HIP-HOP where the likes of Keyza Soulsay, Ike Turner and even internationally known HIP-HOP artist Superstition have performed live for their home town.

Charlotte is still divided between HIP-HOP and Mainstream, but because this event is based on the culture of HIP-HOP it has stood the test of time. This has been the longest running HIP-HOP event in the QC. Artist from all over the Carolinas and beyond have traveled here to showcase their talent, and network with the most lyrically gifted artists in the city.

The event is held the first Monday of every Month at Crown Station located at 1425 Elizabeth Avenue Charlotte, NC. Make sure to check out the next event that usually starts around 10PM. The event starts out with a live “Cypher” before the showcase where artist battle, and go for the Juggler in a battle rap competition where the ultimate prize is strictly bragging rights.

Biltmore Records had the privlige of working with Selector E and other various artist on The Biltmore Records radio show “Cipher Divine” that broadcasted live on 103.3 FM in 2012. This event should be mentioned in the Hip-Hop history books when it come to the Queen city and North Carolina in general. True supporter of HIP-HOP the culture. 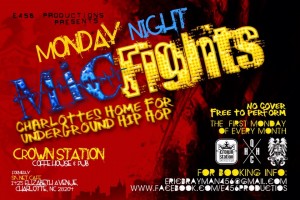 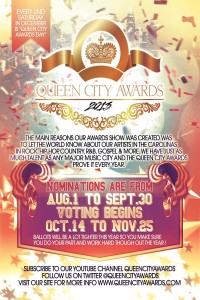 Every Thursday Night at Club MYNT “50Fifty Music” presents Industry night here in Charlotte. It is an artist showcase brought to the city in conjunction with newcomer Laio the manager out of the Atlanta. MYNT night club was previously known as ALLURE nightclub located at 1508 S MINT ST Charlotte, NC. “Club MYNT”. http://www.myntcharlotte.com

The event is fairly new, but we were able to attend the last few shows, and even sit down with the CEO of 50Fifty Music Brice McElroy and Laio Morris to get an idea of their vision and the direction that they are going in for the event and Charlotte’s independent music scene in general. They have a number of up and coming new artists like A-Fresh and C.C. Merit “50Fifty Music”. http://50fiftymusic.com/

The event gives local talent (not limited to any genre) the opportunity to showcase their talent to an audience of at least 200-250 weekly supporters. The majority of the artist have been Hip-Hop, R& B artists, but organizers are adamant about the event being open to all musical genres and talent. From our perspective it is a great service that they are doing for the city by supporting the up and coming artists in the community and helping to bring local music to the forefront.
To keep up tp date on Club Mynt and all of its activities Check out their facebook page. https://www.facebook.com/MyntCharlotte 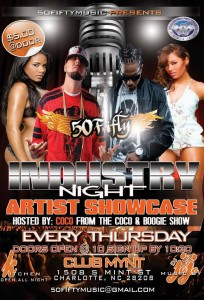